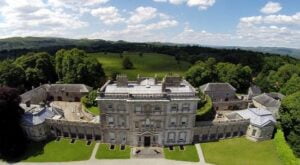 Is a National trust property just 20 minutes from Bawnboy, Florence Court is romantically named after the wife of Sir John Cole who first built a house on the spectacular site in the early 18th century.

The wings and Pavilion were added to the mid-18th century block around 1770 by Wm Cole, 1st Earl of Enniskillen and may have been designed by Davis Ducart. Disaster struck Florence Court in 1955 when the main building was virtually gutted by fire.

The rest of the house and the striking plasterwork after the manner of Robert West has been meticulously restored by the National Trust. Family pictures and historic items owned by the 6th Earl of Enniskillen have been returned to Florence Court in accordance with his wishes, and are on display in the house.

Florence Court is well known to gardeners as the home of the Irish Yew, Taxus baccata ‘Fastigiata’, which is now a feature of gardens throughout the world. The original tree, discovered in about 1760, can still be seen on the fringe of Cottage Wood to the south-east of the house.