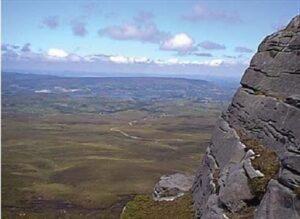 Man’s influence on Cuilcagh Mountain dates back to the Neolithic farmers (4,000 – 2,500 BC) who constructed many megaliths, or stone tombs used as burial places.

Bronze Age (2,500 – 500BC) people built large burial cairns that are located on the western and eastern ends of the summit.

Later evidence of human occupancy is sketchy until medieval times when the Irish population was high and land was at a premium.

More recently, the Irish Famine in the mid-19th Century forced people to abandon the land so all that remains of their once thriving rural community today are derelict stone farm cottages and field walls.